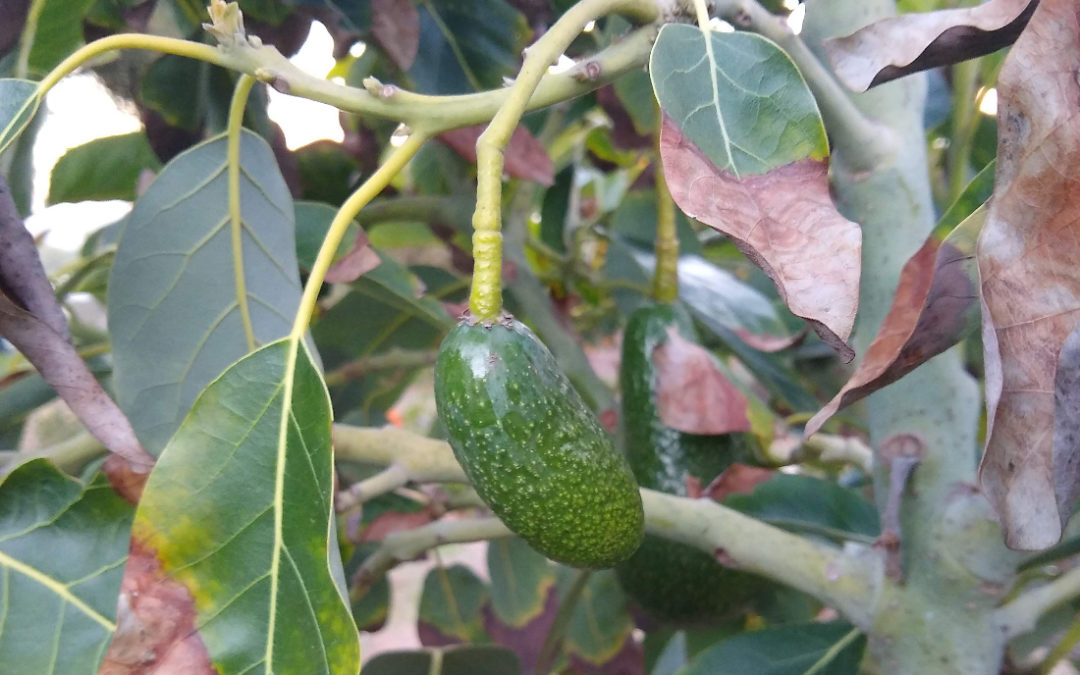 What’s that little pickle hanging on my avocado tree? That’s not a pickle; that’s a cuke: an avocado fruit that developed without a seed inside.

It’s growing on a type of avocado tree called Ettinger, and here is what a normal Ettinger avocado looks like:

The cuke and the normal fruit above are growing on the same tree in my yard. That Ettinger tree is growing near a Fuerte tree, which is another type that often makes cukes. Certain varieties make cukes far more often than others. Ettinger and Fuerte are well known as cuke makers.

In contrast, I’ve never seen a cuke on many other varieties, including Hass. I know that Hass can cuke because I’ve seen photographic evidence, but it’s rare.

It is not well understood exactly what causes some avocados to develop without seeds and some varieties to make cukes far more often than others. The main cause seems to be a defect in the ovule of the flower that turns into the cuke.

In short, what usually happens in the formation of a cuke is that an avocado flower is pollinated and the ovule is fertilized . . .

. . . and a fruit begins to form. But soon thereafter, the ovule that is meant to become the seed inside the fruit begins to degenerate. The avocado fruit continues to grow despite the tiny seed inside having died off. In the end, the remains of the deteriorated nascent seed are usually almost invisible such that the cuke avocado looks totally seedless when you cut it open — except for a narrow sheath of an empty seed coat in the middle.

(Read more about the process of cuke development in “Seedless fruit in ‘Fuerte’ and ‘Ettinger’ avocado” by E. Tomer, S. Gazit, and D. Eisenstein.)

(See also this technical paper: “An anatomical study of ovary-to-cuke development in consistently low-producing trees of the ‘Fuerte’ avocado with special reference to seed abortion” by E. Steyn, P. Robbertse, and D. Smith.)

Other causes of avocado cukes have been suggested in the past, especially factors related to pollination, weather and temperature during bloom, but these have little explanatory power to me. If “incomplete pollination,” “sudden changes in weather,” or “temperatures that are too low” (three suggested causes) were so consequential, then what explains these two situations?

1. In “Seedless fruit in ‘Fuerte’ and ‘Ettinger’ avocado,” the authors mention “2 trees known to bear mostly seedless fruits (one ‘Ettinger’ tree at Kibbutz Rosh Haniqura and a ‘Fuerte’ tree at the Agricultural Research Organization orchard in Bet Dagan).” In other words, there are groves with many Ettinger and Fuerte trees that make mostly regular avocados, but two trees that make mostly cukes. Surely, the weather and temperatures are nearly the same throughout each grove so how could that be of much influence?

2. One of my childhood friends grew up in a house built within an old Fuerte grove. There were Fuerte trees that produced well all over, but a few years ago I noticed one tree that had lots of cukes and only cukes. I asked my friend about the tree. “That tree never produced a regular avocado in my whole life,” he said. Have bees just ignored this tree and only this tree for decades?

Can you eat cukes?

When to pick cukes?

Likewise, cukes of any given variety will be mature and ready for harvest at the same time as regular fruit. With Fuerte as an example again (since Fuerte is our most common cuke maker in California), if the regular fruit is ready to pick from about December through April, then you can pick cukes from a Fuerte tree during the same period. Cukes also take approximately the same amount of time to ripen on a kitchen counter.

A super cuker in San Jose

I would personally prefer an avocado tree that made an abundance of regular, seeded fruit, but if you loved cukes you would love to have this tree in your yard.

Let’s call it the San Jose Super Cuker. A friend who lives near the tree showed it to me. I had never seen an avocado tree so laden with cukes.

Can you spot the clusters of cukes hanging throughout the canopy? Here’s one close up.

For some minutes we peered through the canopy and only saw cukes, until we eventually spotted a couple regular fruit hiding near the top of the large tree. Hundreds of cukes, a couple of regular avocados. The fruit nor the foliage looked like Fuerte or Ettinger. My guess is that the tree is a seedling, but a seedling with fine tasting little pickles.

In this video, I eat some: