Where should you buy a fruit tree? 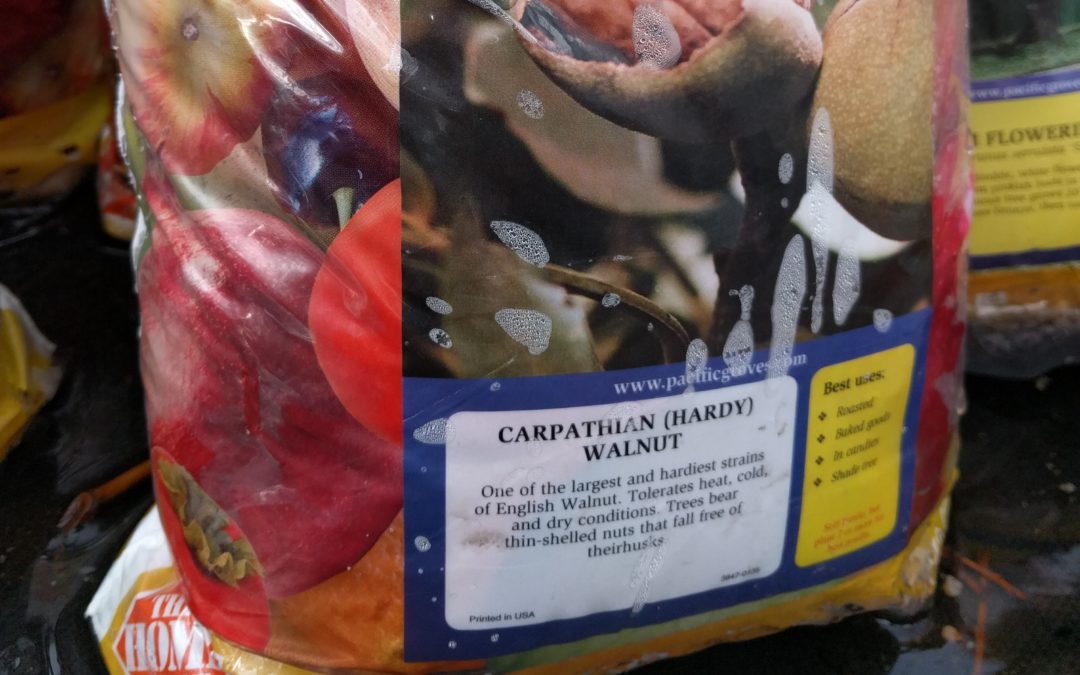 “Sorry,” I said as I leaned in front of a guy to snap the above photo of the label on the bag of a bare-root Carpathian walnut tree at Home Depot.

“Do you know what is different these?” asked the man, pointing also at the tree beside the Carpathian walnut, labelled Hartley walnut.

The man had a well-trimmed gray moustache. He was wearing a name tag that read, “KHODAYAR.” It hung on a collared McDonald’s shirt. He also wore a McDonald’s hat.

“No, that’s exactly my question! I’ve never heard of these varieties being grown around here.”

“In my country, many walnuts. But there is cold. Snow on ground. My neighbor here, big walnut tree, but no nuts!” Khodayar looked around and said, “We can ask someone, but where is manager?”

I whispered even though no one was around, “You know what, I wouldn’t bother. The people who work here usually don’t know plants very well.” I saw that he was holding a phone. “It would be better to search for the information on the Internet.”

I’ve bought a number of fruit trees from Home Depot over the years, and I’ve asked the workers in the garden section about the plants many times. I no longer bother. I think of buying a fruit tree at Home Depot as like buying a car at an auction. You have to know plants yourself or buyer beware.

Not that you can’t get a quality fruit tree at Home Depot. In fact, it’s something of a secret that many of the trees at Home Depot, other big box chains, and local nurseries are actually exactly the same trees. There are two major wholesale growers of subtropical fruit trees — think citrus and avocado — in Southern California, and they supply most retail outlets, big and small.

La Verne Nursery is in Piru, Ventura County, and Durling Nursery is in Fallbrook, San Diego County. These wholesale growers put different tags on the trees they grow according to where they’re being sold. It’s like the cereal factory that puts the same corn flake concoction into one generic box as into another brand name box. If the trees are being sold at Home Depot the tag will say nothing about La Verne or Durling. You’ll just think it’s a Home Depot tree. 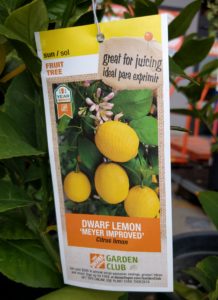 But have a look down at the sticker on the tree’s container and you’ll see the name of the nursery which grew the tree. 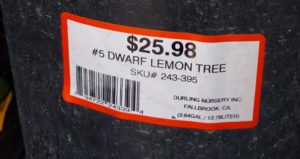 On the other hand, here’s what the tag on a citrus tree grown by Durling Nursery usually looks like if it’s being sold in a nursery. 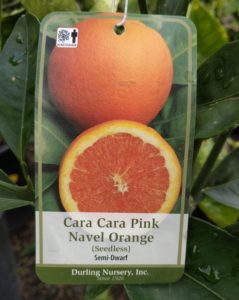 You see on the tag that it is a Durling tree.

I had to recommend a nursery

Not so for deciduous fruit trees, however. The walnuts that Khodayar and I were looking at were grown by Pacific Groves, a wholesale grower up in Oregon and Washington. I’ve never seen Pacific Groves trees at a nursery in Southern California. And just as I’ve never seen the Carpathian or Hartley walnut varieties, other varieties of these bare roots here at Home Depot were curious, even suspicious: Bing cherry, for example. I didn’t think we could grow those in Southern California. They’re said to need about 700 chill hours. Nowhere outside of the mountain towns in Southern California gets that cold in winter, and this particular Home Depot was in the city of San Diego, in a location that might average half that many chill hours. Hmmm. It’s like buying a car at auction.

“Or you can go to a plant nursery nearby and they will probably have only trees that grow well in this area,” I said. “Do you know the nursery called Walter Andersen’s?”

Khodayar said he did. “Expensive! Do you know how much for pistachio tree from my country? Do you know? Two hundred!”

“Wow! But right now they have cheap trees. Not this cheap,” I pointed to the $19.98 price tag. “But only about ten dollars more. Only now in January, they have these cheaper bare-root trees.”

“Which country are you from anyway?”

Khodayar lit up and spoke for a long time about how big the pistachios are in Iran, how thin the shells on the almonds are, how amazing the cucumbers smell, and how you can put an Iranian apple in your pocket and it gives off such an aroma that you don’t need to wear perfume.

I left Home Depot and drove to Walter Andersen Nursery, and on the way the irony caught up with me. Khodayar missed fresh, homegrown food. The last thing he mentioned was that tomatoes in America are so big. “But inside, just water.” All the while, Khodayar worked at McDonald’s. 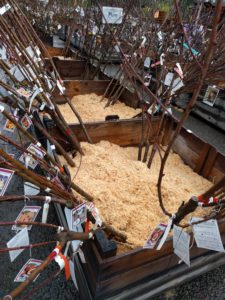 At Walter Andersen’s nursery I was interested in buying a bare-root Fan-stil pear tree, a type of pear that is known to grow well in the mild winters and hot summers of inland Southern California, and I felt a sense of urgency about it. Just as there are two major growers of citrus and avocado trees for home gardeners in Southern California, there are two major growers of deciduous fruit trees: Dave Wilson and L.E. Cooke. There were two growers, I should say. L.E. Cooke, grower of my Fan-stil pear, won’t be around next year.

I asked the manager at Walter Andersen’s what was going to happen to their stock next year considering L.E. Cooke had announced that it would stop operations this spring. “Probably only Dave Wilson,” he said.

Why is L.E. Cooke closing? They’ve been in business since 1944 and are beloved by retail nursery owners and home gardeners like me. The President and CEO of the company took the time to write a detailed and candid letter of explanation on their website about why they’re closing, and one of the reasons is that in recent years they have chosen not to sell to the big box chains like Home Depot but instead to focus on supplying the local, independent nursery market.

As the letter says, “We always felt that Independent market served the country best with the most diverse products, customer training and stability of year to year volume (even during recessions). Contrary, we felt the box store model drove prices down for everyone, stifled new products as they offered a narrower scope of products and turned off the gardening public when they were not trained how to be successful keeping their plants and trees alive.”

Man, did that ring true. At Home Depot, Khodayar could’ve bought a cheap Carpathian walnut tree without any guidance on whether it would actually produce nuts in his San Diego yard, let alone how to prune or otherwise care for the tree.

Is your local nursery valuable?

I asked the Walter Andersen nursery manager if he had time for another question. “Sure.”

“Any idea if Dave Wilson will start growing some of the L.E. Cooke varieties in the future?”

“I know they’re going to take on the Tropic Gold apricot, but I’m not sure about a lot of others.”

The Tropic Gold apricot is a variety that L.E. Cooke grows especially for Southern California gardeners because it produces well here even as many other apricot varieties don’t.

“How about peaches?” I asked.

“Galaxy? Never heard of it.”

“It’s a donut-type peach. I’ve never even tasted one, but my neighbor has one and says it’s the best tree in his yard. So productive and so tasty.”

“Oh, it’s productive? That’s one of the problems with some donut peaches. Galaxy? I’m going to go look it up right now.”