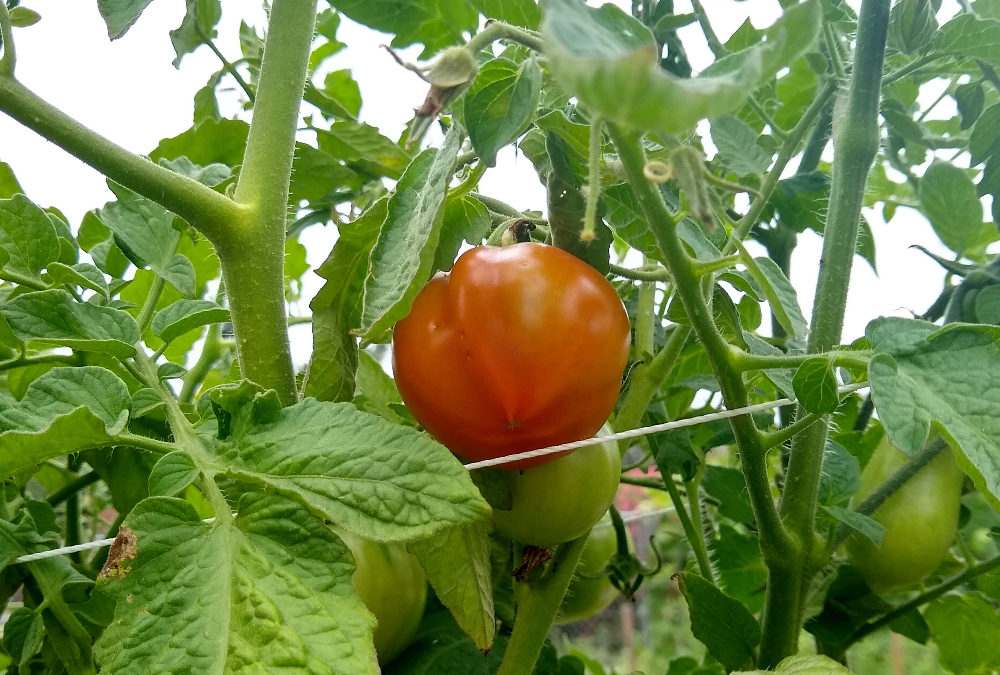 Occasionally, if I’m not producing certain vegetables in the garden, my wife buys them at the grocery store. She’ll buy some peppers in winter, for example, or cauliflower in summer. But never do we buy tomatoes.

If you’re a gardener, you know that. Here’s what I know about how to grow your own tomatoes so that, at least during summer and fall, you don’t have to buy tomatoes at the grocery store.

Most people grow their tomatoes by buying plants to transplant into their garden.

Sowing tomato seeds gives you some advantages though, including access to more varieties and control of timing and stock.

When to plant tomatoes in Southern California

If you grow your tomatoes from seed, then you can sow them in containers 1-2 months before you intend to plant them. Or, you can sow the seeds directly in the garden ground around the same time that you would put in transplants.

When is that? In Southern California, after mid-March is usually a good time to put in your first tomato transplants. And July 4th is about as late as you should plant tomatoes if you want to get a full crop before the weather cools in late fall. (Late May is the latest I’d sow tomato seeds.)

Here is what happened to my tomato plants one year when I planted them before the weather was right: “I planted tomatoes too early.”

Technically, you can grow tomatoes year-round in most parts of Southern California since the weather rarely gets cold enough to kill plants. I often let one or two of my cherry tomatoes go through the winter since such small-fruited types ripen better in the cool weather.

If you’re close to the beach, then in some years you get a lot of May Gray and June Gloom such that it might be smartest for you to wait until May or June to plant varieties with big fruit so that they are ripening that fruit when the summer heat finally arrives starting in July.

Our warm season lasts so long in Southern California, that we have time for multiple tomato plantings. I’ve settled on two main rounds: an early and a late.

I plant a group in March or April, which I’ll start eating from in late May or early June. And then I plant a group around June that gives me fruit through the fall.

One reason to do this is that tomato plants started in April are unlikely to still be growing well and producing lots of tomatoes in the fall. It happens, but most of those early tomatoes decline starting around August – due to powdery mildew, mites, some soil-borne fungus, etc.

Find more nuances about when to plant tomatoes in Southern California in my post on the topic.

When you plant tomatoes you can bury part of the stem because tomatoes make adventitious roots. In other words, when you bury a tomato stem it grows roots along the stem. Some people even think that burying the stem of a tomato plant is the best way. I’ve never noticed that it makes a difference. That being said, if a plant is tall and wobbly then you can bury it deep in order to help it stand erect.

Most farmers space their tomato plants 18 inches apart down a row, except for cherry types, which are planted more like two feet apart since those plants are bigger. I also use this spacing when I support them into an upright shape. If you’re letting your tomato plants sprawl, then you need to space them out more – up to four feet between plants.

Tomatoes do not need to be supported. You can let them grow naturally, like bushes that sprawl on the ground.

The advantage of this is not having to put in the time and effort of supporting the plants. The disadvantages are that the plants take up more ground space, some of the fruit lies on the ground and is sometimes munched by bugs, and harvesting is harder because you must step into the bush to get fruit in the middle. One year I grew a Sungold cherry tomato plant without support, and that single plant became a jungle. Every time I entered the jungle to pick fruit near the middle, I came out smelling like tomato vine for hours.

So these days I usually stake-and-string my tomatoes or put large cages around them.

Have a look at this post for pros and cons of these two methods of supporting tomatoes: “Comparing tomato supports: cage versus stake-and-string.”

The only time I prune tomatoes is to get the plants and fruit up off the ground. So I’ll cut off some lower stems so that the plant branches out higher up and therefore keeps its fruit higher up. This makes supporting and harvesting easier.

You don’t need to wait to harvest a tomato until it has full color on the vine in order for it to have full flavor. You can pick it a bit earlier than that and let it finish ripening on the kitchen counter.

How early can you pick a tomato? In order for it to turn full color – red, usually – it must have some of that color in the skin when you pick it. In other words, if a regular red tomato has some red blush on the skin, you can pick it and it will fully color to red off the vine. You cannot, however, pick the tomato green and get it to turn red off the vine.

I used to wait to pick my tomatoes much longer than I do now. These days I find myself harvesting earlier due to the reasons above.

Which tomato varieties do best in Southern California?

Everyone who has been growing tomatoes for a while has settled on favorite varieties that they grow every year – because they like the taste and because the plants produce well for them – but everyone’s favorites are different.

Here are some varieties that are the favorites of local, seasoned tomato growers whom I know.

See details on a handful of varieties that grew well in my garden a few summers ago: “Tomato varieties for Southern California, 2019”

Every year, the weather, pests, and disease pressures are slightly different in a garden, and you shouldn’t expect perfect tomato plants like you might see in a blog or vlog. Those are faked. Not even the best farmer grows perfect tomatoes.

Here are some of the many ways that my tomatoes and those of others in Southern California go wrong: “Failing at tomatoes.”

And here is a post I wrote about solutions for some of the most common issues that we deal with on tomato plants in Southern California, including mid-summer decline, blossom end rot, skin cracking, sunscald, root knot nematodes, powdery mildew, mites, critters eating tomato fruit, and plants that don’t produce fruit. The post is called, “Succeeding at tomatoes.”

While I have seen a difference between a tomato plant’s performance when watered daily versus never, I haven’t seen a difference between those watered daily and those watered about weekly. As long as the right quantity of water is given or available to the plant, then any frequency of application between those extremes is effective in most soils (containers are different).

What’s the right quantity of water to give to tomatoes? This will depend on a few factors, such as how big the plant is and how far inland your garden is (that is, how hot your location is in summer). But here’s a starting point:

Give a mature (large, holding fruit) tomato plant about 7 gallons of water per week in summer.

I’d split that watering into two or three applications. In other words, for example, for a mature plant in July you could water 2.5 gallons (the quantity that a large watering can holds) on Monday, Wednesday, and Friday – for a total of 7.5 gallons for the week.

See how the plant does and adjust accordingly.

I’ll tell you what my routine is regarding tomato fertilization, as well as what others do and recommend. I personally don’t treat tomatoes any differently than my other vegetables. I continually add compost and only compost to my vegetable beds for fertility; this compost contains chicken manure; and that’s all I do. My results are generally good, but maybe they can improve by incorporating some of the advice of others.

The California Master Gardener Handbook recommends fertilizing tomatoes this way: “Sidedress plants with nitrogen fertilizer when they set their first fruit and every 4 to 6 weeks thereafter . . . If some form of manure was used at planting, reduce the fertilizer rate by one-half.”

Just today I spoke to my tomato guru, Roy Wilburn, about his fertilization practices. Roy has farmed tomatoes for decades in Southern California and Baja California. His current routine is to use no chemical fertilizers, but rather to amend a bed at planting time with compost, chicken manure, worm castings, and BioFlora Dry Crumbles 6-6-5. The BioFlora contains bone meal, chicken manure, sulfate of potash, and seaweed.

Roy then sidedresses the plants with BioFlora about the time they make their first flowers, and then approximately every two weeks after that, depending on how the plants are performing.

One additional thing that Roy does is add beneficial nematodes to the planting hole of every tomato. He uses the product called, “Fungus Gnat and Root Knot Exterminator,” which contains the nematode species Steinernema feltiae, and which can be purchased at a good retail nursery.

Roy gets phenomenal yields from gorgeous tomato plants, year after year. Each year I find myself more closely emulating many of his tomato growing practices because of the results they produce.

I have grown many tomatoes in containers over the years, and I grew a handful in containers last year. Richer, more expensive potting soil grows better tomato plants, in my experience. It’s worth the money to fill your pots with the good stuff. I often use my own compost, but Recipe 420 is one mix that you can purchase and that I got good results from last year.

And since tomatoes are big plants, don’t skimp on the container size. Using a five-gallon container is sufficient when the plants are bearing their first fruit, but ultimately the plants should be in a 15-gallon container or a half-wine barrel once at mature size. Bigger containers also allow you to water less often.