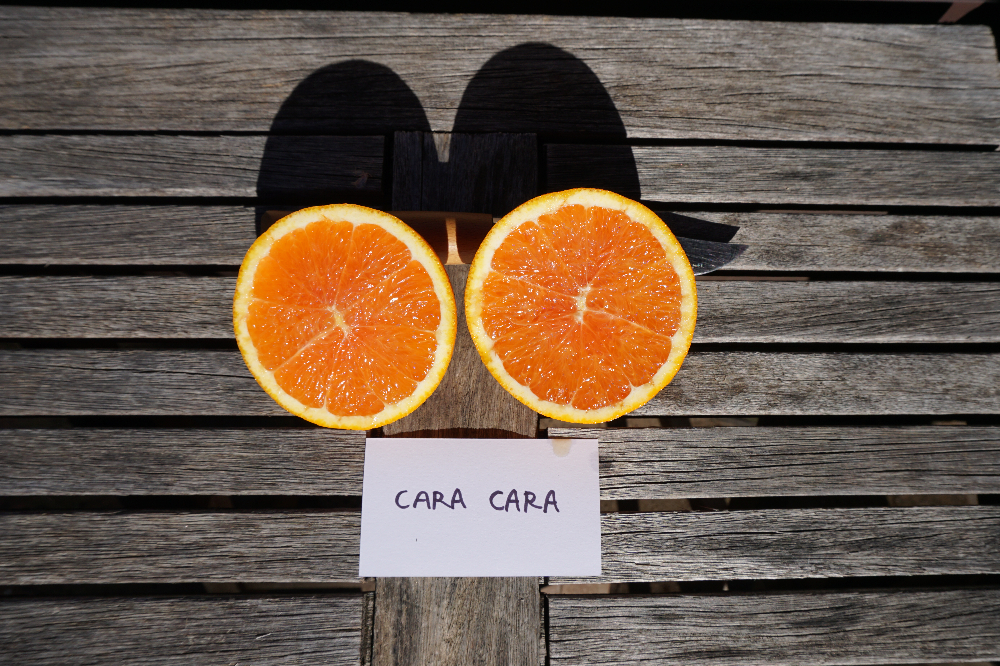 Cara Caras are tasting like candy here in mid-February. They’re like a pink Jolly Rancher – even though they’re an “orange.”

I hear of people harvesting Cara Caras around Christmas, and the entry for Cara Cara navel orange in the University of California at Riverside’s Citrus Variety Collection says the harvest there is November to January, but the fruit from my tree in San Diego County are always sour until well after Christmas. The last half of February is usually the period of best flavor and highest quality for fruit off my Cara Cara tree. And in fact, I once tasted Cara Caras from a tree in the Riverside Collection in early March and they tasted excellent – full, sweet flavor, and still full of juice.

If you’ve only had Cara Caras from a grocery store, you might not know how good they can taste. The primary goal of farmers is not to pick fruit at their peak of eating quality. Only from a backyard tree can you discover the taste potential of a fruit.

This post will profile the Cara Cara fruit, tree, and a bit of history so that you can decide if it deserves space in your garden. Does Cara Cara have what it takes to merit a piece of ground in your yard?

Sometimes called Cara Cara pink navel orange, the fruit’s distinction is its color. Outside, it looks just like any navel orange, but inside you find flesh the color of a “red” grapefruit.

Where does this pigment come from? It’s said to be lycopene, a “red carotenoid pigment with antioxidant properties, most commonly found in plants such as tomatoes,” according to UC Riverside researchers.

This is in contrast to blood oranges. Cara Cara is not a blood orange. Blood oranges (varieties such as Moro, Tarocco, and Sanguinelli) get their more purple coloring from anthocyanin, and often blood oranges hint at the color of their flesh inside with a blush of red or purple on their rinds.

In addition, blood oranges often have streaked or blotchy coloring, similar to tie dye, whereas a Cara Cara’s coloring is more uniform.

Do the compounds that impart coloring also affect flavor? People talk of tasting cherry, rose petal, raspberry, and blackberry in a Cara Cara. (They often say similar things about the flavor of blood oranges.) But I’m unconvinced. I used to think I tasted those notes also. Nowadays, I suspect that the color of the flesh causes people to think they taste such elements. Note that these elements are also pink, red, or purple.

I doubt I could tell the difference between a Washington navel and a Cara Cara in a blind taste test. Could others?

Yesterday, I set up two of my kids and my mom. First, we ate a bunch of both. Then I handed my kids – whose eyes were closed – a wedge of Washington. “Taste it and then tell me which you think it is before opening your eyes,” I said.

Could my mom do better? I handed her a wedge of Cara Cara. She took her time considering its taste with her eyes closed. “This has to be Cara Cara,” she said. Right!

How did she know? “Cara Cara has something melodious,” she said. I don’t know what that means, but I guess she tasted it (and didn’t hear it?).

Regardless, if you think you taste something more complex and interesting in a Cara Cara pink navel compared to a regular orange Washington navel, then you are still experiencing it in some way, and that might be enough to prefer it over an orange orange.

More objectively, like the Washington navel, Cara Caras are considered seedless. From my tree, I find a single seed in about every five fruit. And there is a belly button on the bottom of both.

The story goes that in 1976 a single branch on a Washington navel orange tree growing on Hacienda Cara Cara in Venezuela was noticed to be making fruit that was pink inside. The branch was a “sport,” as it’s called, a natural mutation.

These sports happen relatively often on citrus trees compared to other types of fruit trees. You can see other sports that have occurred on other Washington navel orange trees over the years and have been considered worth preserving (not all mutations are for the better) on this page called, “Holdings of the University of California Citrus Variety Collection Navel orange.”

Anyway, the sport branch found in 1976 on the tree in Venezuela was grafted onto other trees and continued to make fruit that was pink inside. The mutation was stable.

A few years later, the novel navel was brought up to Florida and then onto California. What a strange circle!

I planted a Cara Cara tree from a five-gallon container in my yard in 2015. So at the time of writing, this tree has been in the ground for about seven years.

In that time it has never had a year without fruit, and in fact its production has been very consistent. I would estimate that this year the tree carried 70 oranges.

The tree is currently almost six feet tall and just as wide. In terms of growth, I’d call it moderately vigorous, not a runt and not a rocket. It is growing near a Gold Nugget mandarin tree and a Kishu mandarin tree, both of which were planted one year earlier and on the same rootstock (C-35 citrange). I water and fertilize all of these trees the same, and the growth of the Cara Cara has been slightly slower than Gold Nugget but slightly faster than Kishu.

Other Cara Cara trees that I know in other yards are similarly productive and vigorous compared to mine.

Comparing foliage color, Cara Cara wins. It has deeper green and larger leaves versus those mandarins. It is like other oranges, whose trees are always prettier than mandarins.

In case you’re curious, my Cara Cara is watered with drip emitters and I maintain a deep mulch of wood chips under the tree at all times but have never added other forms of fertilizer.

As for toughness, my Cara Cara has gone through many days with temperatures in the 110s and one day reaching 118 (back in July of 2018) without damage except to a couple pieces of sunburned fruit; and temperatures have gotten as low as 25 (in February of 2020). The 25-degree night caused no damage to the fruit on the tree, but some of the outer leaves were lightly singed.

Do you need a Cara Cara in your yard?

I chose Cara Cara as my yard’s navel orange tree so I’d have something different to share and because the highest quality Cara Cara oranges can rarely be found in stores. Plus they’re my wife’s favorite orange.

Where to buy a Cara Cara tree?

If you don’t have a nursery nearby or are outside California, check out Four Winds Growers. They ship good Cara Cara trees. I’ve bought citrus from them before and can vouch for the quality.