Effects of the cool, wet spring on our Southern California gardens 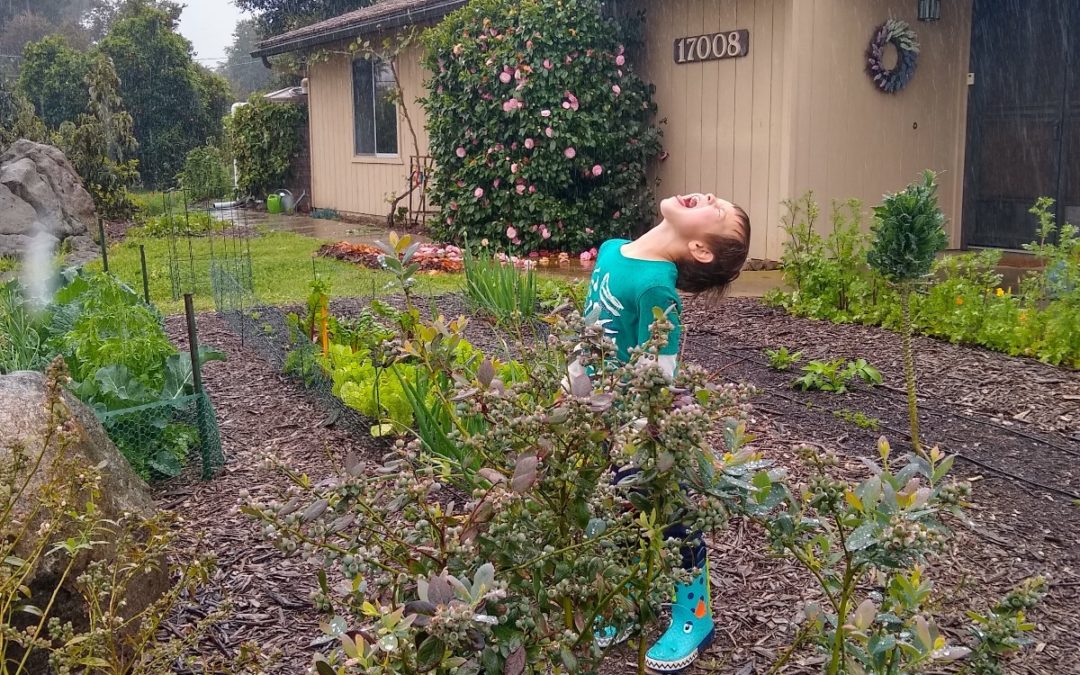 The drama of weather: Back in February, I was resigned to the rainy season having ended prematurely. There had been no significant rain since Christmas. I started watering some vegetables and fruit trees. And then we got a nice storm on February 22, George Washington’s birthday. And then another storm arrived in early March, and then another, and another.

Yes, March can be rainy, but it’s not usually that rainy. For example, in Los Angeles, as measured on the campus of USC, precipitation averages 2.43 inches in March but this year received 4.35 inches.

Today is April 10, and it has been raining for the last five days straight. My rain gauge says my yard has received over five inches from this storm alone, and I am listening to the rain continue to fall as I write. (Update: We ended up getting a total of 6.16 inches.)

Today’s neverending storm has broken records. The daily precipitation record for yesterday, April 9, was set by a storm in 1912 for Riverside, but this storm broke it, as Riverside recorded 0.71 inches yesterday. That same 1912 storm set the daily record for San Diego, but San Diego broke it and recorded 1.16 inches for the day, yesterday.

As far as the whole month of April goes, the average precipitation for Los Angeles (USC) is only 0.91 inches — less than one inch for the whole month — so clearly this weather is not our norm.

What a gift though, right? What are the effects of this wet (and therefore, cool) start to spring on our gardens? Some are obvious, some less so. And surely, others will reveal themselves only over the next few weeks and months.

Walking in the University Heights neighborhood of San Diego yesterday, I noticed thistles and crab grass exploding out of every crack in the sidewalk. In my own yard, winter weeds like filaree continue to germinate and grow fast. It seems that as soon as I mow or run the chicken pen across an area, the pasture has replaced itself the very next day. At least the honeybees like the flowers of the whitestem filaree (Erodium moschatum).

Also, the other flowers that grow naturally and those I’ve specifically planted for the bees are growing exceptionally well, and some have started to bloom, such as borage, tansy phacelia, and poppies. I made a video about these ones last week.

On the other hand, the flowering of avocados has stalled. Usually, April is the month of peak bloom for most avocados. But this year, many trees have either stalled in the early stages of their flowering or have not yet even started.

My avocados always bloom a bit later than trees in most other parts of Southern California, but never has it been this delayed. Here on April 10, my avocado trees have barely opened a few flowers, and those are only on the early varieties of Pinkerton and Fuerte.

(What can you do about it now? Nothing. But for details see my post, “Dormant spray deciduous fruit trees?”)

When it rains it’s cloudy and therefore cool. The National Weather Service noted that Burbank’s high temperature yesterday (April 9, 2020) was only 52, which is a full 20 degrees below normal. So the vegetables we’ve planted to grow through summer haven’t exactly rocketed in growth. For example, the tomatoes I planted on February 29 are only inching up, just waiting for the normal sun and heat, but they do still appear healthy.

Such weather is hospitable to the leftovers from winter, however. Lettuce is thriving. Carrots are happy. Peas feel like they’re in England. The late cabbage that I planted on February 10 continues to grow large leaves — and with very few aphids on them — and I can see that the heads that form will likely be satisfyingly large as well.

Who knows if this will be our last real rain for the season? It should be. And if it is, it has already been enough to slightly shorten our irrigation season. While some vegetables might need water again in a week if the weather is dry, some established fruit trees might not need water until beyond June. You might remember that last winter we had many inches of total rain, but the rain stopped in March, practically speaking. (April 2019 only recorded 0.4 inches in my yard for the whole month.) Even then, I didn’t need to water my deciduous fruit trees until early June.

I appreciate the delayed start to our long dry season where the constant irrigation is a necessity for almost all vegetables and fruit trees all the way until rains return, usually around November.

(What if you don’t water? Check out my post, “Unirrigated fruits and vegetables in Southern California, summer 2019.”)

Will this spring get even stranger and storm again though? Will some fruit trees not need water until late June, after summer has officially started? It will be fun to watch the drama of the weather — and caused by the weather — play out.