Sowing vegetable seeds in the ground in Southern California: Three keys to success 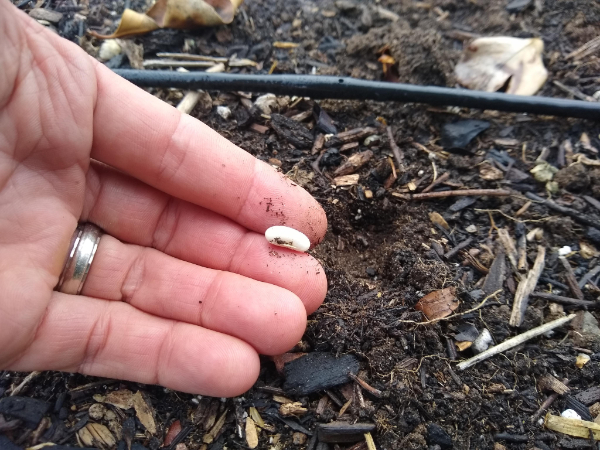 I remember well the first time I sowed vegetable seeds. They were green beans. I stood there holding the packet, looking at the garden dirt wondering, “Do I really just bury them and they’ll grow?”

Though I’ve done much sowing since then, I still mess it up from time to time. Below are the three ways I’m inclined to get it wrong — except that I’ve decided to frame things generally, as if you might also make the same mistakes. (Presumptive me.) And I’m framing things positively: Three keys to success in sowing vegetable seeds directly in the ground in Southern California. Doesn’t that sound encouraging?

First, remember to cover the seeds with a bit of soil or compost but not to bury the little guys in a grave.

This is especially important to remember when sowing small seeds such as lettuce, parsley, or carrots.

While we in Southern California should generally ignore what seed packets say about when to sow certain vegetables, we should not ignore advice about sowing depth.

Instructions about sowing depth are mostly based on the size of the particular seeds. Put simply, sow big seeds deeper than small seeds.

I like the rule of thumb that Robert and Cheryl Gough give in their book The Complete Guide to Saving Seeds, which is: “Don’t cover seeds to more than twice their largest diameter.”

However, in practice, what I do is sow all big seeds to the depth of my first knuckle, and for small seeds I don’t even make furrows or press them into holes. I just sprinkle the seeds, then sprinkle just enough compost over them until I can no longer see the seeds.

Covered or buried too deeply, small seeds will either never germinate or only a small percentage will emerge from the soil; small seeds don’t have enough energy within them to break through inches of dirt to reach the sunlight.

Before sowing, thoroughly wet the soil

But let’s back up. Before even sowing a seed, you should make sure that the garden dirt you are going to sow into is wet at least a foot deep.

If you sow into garden dirt that is dry or only wet down a couple inches, you are inviting challenges. Seeds only germinate if kept moist. But if you try to wet the soil after sowing you’ll find that your seeds unearth. Some of them will float up to the surface of the dirt. Better is to sow into wet dirt because the seeds will stick to the wet dirt and stay in place.

Further, once the seeds germinate they send down a root as deeply as they find the soil conditions hospitable. One of the conditions for being hospitable is being moist. But you don’t know when the seed is germinating, as it happens underground and out of sight, and before the first leaves emerge above ground.

Wetting the soil before sowing ensures that the germinated seeds have no barrier to getting a fast and strong start to life through being able to root down as deeply as they want. Moreover, it removes the need for you to later guess about or dig to test how much wet soil the plants have to work with. (Moisture deep in the soil remains in place, essentially waiting for plant roots to drink it. It doesn’t dry up.)

So, first, ensure the soil is wet. Second, sow seeds. In that order.

Third, with small seeds, and especially outside of the winter season, you might have to irrigate lightly so that the soil around the seeds stays moist until the seeds germinate. This is because the sun and wind do evaporate moisture from the soil near the surface, and small seeds must be sown very close to the soil surface.

For example, I sowed a row of carrots a week and a half ago, on February 3. It was sunny and in the 70s for the next four days so I watered lightly each morning. But since then it has been cloudy and cooler, and I’ve only needed to sprinkle the row every two or three days. I know when I need to water by feeling the moisture in the dirt at the depth where I sowed the seeds.

With big seeds, on the other hand, I’ve never found a need to irrigate after sowing — and before the plants have emerged. In fact, if you do water and keep the soil soggy around such big seeds (think: beans, peas, corn) you run the risk of rotting them.

Protect from birds and bugs

Finally, don’t do all this work of sowing vegetable seeds and ensuring moisture in the soil only to feed wild animals.

Birds can be attracted to your seeds. Specifically, I’ve noticed white-crowned sparrows and towhees scratching up seeds and munching first leaves as they emerge. Pill bugs, earwigs, snails and slugs will also eat leaves as soon as they emerge.

There are various ways to prevent these critters from spoiling your sowing. In my own yard, I attempt to debug the area I intend to sow before I sow. I do this with my chickens sometimes. (“Chickens: my garden’s little helpers.”) And I also run my fingers through any nearby mulch to reveal hiding bugs. If found, they get squished or fed to the chickens.

For the birds, lately I’ve been getting good results from laying tulle fabric over a sowing. I’ve found that this also prevents rabbits from munching the seedlings.

If you notice seedlings emerging but then disappearing, work fast to figure out who is doing the damage or you’ll lose the whole sowing. The first thing you might do is go out after dark with a flashlight to check for the presence of bugs and snails and slugs.

Of course, other things can go wrong with a vegetable sowing. If you haven’t dealt with weed seeds in the area, then that can be a nightmare. (See the stale seedbed section of my post, “How to outsmart garden weeds.”)

And the first order of business should actually be to make sure you’re sowing the right crop at the right time. This is even more important when direct sowing compared to transplanting seedlings.

For example, sowing peppers directly in the ground right now (February) is likely to be a bust since germination will take forever in the cold soil and the plants will grow so slowly that they probably won’t outgrow bug damage whereas you could plant pepper seedlings right now and they’ll probably just sit around not growing much for the next month or two, getting some bug damage but not being killed. (See this post for more on timing: “Which vegetables can I plant now in Southern California?”)

It’s raining lightly as I write this: an ideal circumstance in which to sow vegetable seeds. The garden might get another row of carrots today. Now, if I follow my own advice . . .